As a part of our ongoing commitment to offering a global education to our Otsuma Nakano students, our Model UN & Peace Club members and 3 Global Leaders Class students journeyed to Meiho Junior and Senior high school to participate in an idea sharing activity with Meiho’ 21st Century students.

The Otsuma Nakano Model UN & Peace Club members and GLC students, after finishing their final exams, prepared a 25 minute English presentation about how to sustain peace in the 21st Century.  Their presentation topic was “What is peace?”  “Peace” is a term that is hard to discuss since there are so many different opinions on the subject.  Our ladies, however, decided to focus on the reasons why peace breaks down and turns to war.  They proposed that resource management be the focal point of the future sustainment of peace.  ONHS students pointed out that many wars are fought over the mismanagement of coveted resources such as oil, diamonds, and land.  In addition to that, the ONHS students proposed that there be a third-party system created to ensure that fair usage of resources among countries be monitored to reduce the threat of war over the demand of said resources by powerful nations and other competing nations.  All of the students used English during the presentation.  After the presentation was finished, Meiho’s 21st Century students asked various questions in English to our ONHS ladies.  Overall, the presentation went well and our ladies hope to spread the message of peace to other high school students in the future.  It was a very good outing for Model UN and Peace Club members.  They were able to share their opinions with Meiho’s 21st students.

Our ONHS ladies discussed “Universal Basic Income” with the 21st Century Meiho students.  At the beginning the students had a “brainstorming session” lead by Mr. Travis Holtzclaw.  During this time, the students from both schools provided key words in the form of mind mapping on a dry erase board.  Terms such as “free money”, “taxes”, “poverty”, “crime” and phrases such as “freedom to choose employment”, “abuse reduction” and many others were introduced.  After that, each group made summary presentations about what their groups discussed about universal basic income.  Each group had beneficial discussions.  Every student contributed something to the conversation.  The main point of focus was that with the future “robotization” of business, people will still need to meet their basic needs.  Therefore, it is important to take into consideration the concept of “universal basic income” and its viability of adoption by governments both rich and poor.

For the 2017 NFLJ Debating Tournament at iCLA

Overall, this exciting and useful inter-high school co-ed idea sharing idea went very well thanks to Mr. Travis Holtzclaw and the Meiho 21st Century teachers.  Both the Otsuma Nakano and Meiho 21st Century students gained a lot of incite in the two topics covered.  In the future, Otsuma Nakano will host the Meiho 21st Century students along with other high schools for a student led idea sharing activity.  Also, our Model UN team is preparing for the Model UN Conference in Tokyo, Japan.  Our debate team is preparing for the 2017 NFLJ debate Kofu, Yamanashi at iCLA.  Finally, our Peace Club is preparing for a summer activit.  And also one of the members is participating as the ambassadors for peace, who is going to Nagasaki and Geneva, Switzerland in August. 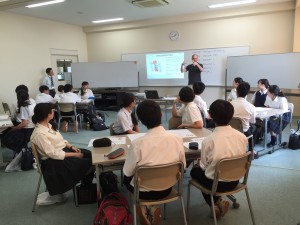 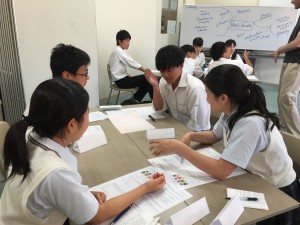