Hello! I'm Haruka Koyama, a Year 10 student of Otsuma Nakano Senior High School.  I have been staying in New Plymouth, New Zealand since the end of January and I am going to be here until the middle of April.  It's been only a week since I came here, but I learnt a lot of things.

I came here with my friend, Nonoka. We arrived on Saturday, January 30th. It took about 15hours (including transit at Auckland) from Narita airport to New Plymouth airport. It was a very very long trip.

My pleasure to introduce my hostfamily.  There are 5 people in my host family. My host father, host mother, host brother, and 2 host sisters. They are very welcoming me and very kind.

On Sunday morning, I went to City Church with my host family.  Actually it didn't look like a church I expected. There was a band, and they held a small concert. After that, we went on a picnic at a big park.  At night of the day, we went to another park to see "Festival of Lights".  It was so beautiful. There was a Japanese garden in the park, which was amazing to me!

On Monday, it was my first day of school. My house is very close to my school, so I and my host mother walked.  There was a ceremony at the assembly hall, and I participated in that. I couldn't understand what the teachers said.  When the ceremony was finished, we went to the library. There are 9 new international students from all over the world, including us. One from Chile, one from Spain, one from Papua New Guinea, one from Germany, one from India and two other Japanese girls.

We had orientation from Monday through to Thursday.  What we did in first four days were as follows:

1. Writing a diary every day.

2. Filling in some information about us.

3. Introduction to the school including school tour.

4. Sending a postcard to my family in Japan.

7. Having an interview with ESL teachers.

9. Introducing ourselves to our teachers.

We experienced a lot of things and we could know about school well.

By the way, I chose music, sports, and ESOL as my optional subjects. The orientation was a very good opportunity to know each other.

On Friday, finally, my classes started.  New Plymouth Girls' High School (NPGHS) usually starts at 8:40, except Tuesday because of teacher's learning, but only for this week, we started at 9:00. First spell was ESOL. ESOL is a class for international students. Second spell was English, but we did nothing. Third spell was science, which was biology. Unfortunately, I couldn't understand anything in that class. Fourth spell was music. To my surprise, their music level was higher than Japan. They use "apple pie","cranberry pie", and "boysenberry pie" to keep rhythm. After keeping rhythm, the teacher played the piano and made some sounds we wrote down on paper. It was the most difficult music class that I've ever had.

This weekend, I'm staying at Nonoka's house because my host family had to leave home for their relatives for 4 days. Monday is a public holiday called "Waitangi Day" which is a very important day for New Zealanders. On February 6th 1840, there was the first treaty agreement between England government and Māori chief. As for this dinner, we made Japanese pancake "Okonomiyaki" for them and it was amazing.

I hope all of you reading this report would know about my New Zealander life as "kiwi girl".   Thank you for reading and see you in two weeks! 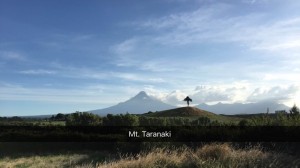